Explosions occurred during Easter services at churches in the cities of Colombo, Negombo and Batticaloa. Additional blasts ripped through three hotels, the Shangri La, Cinnamon Grand and Kingsbury Hotel, all in capital city Colombo, according to state broadcaster SLRC.
At least 20 foreigners are among the dead in Colombo, according to hospital Director General Anil Jasinghe.
Sri Lankan security officials said police and security services immediately rushed to all affected areas and sealed off the churches and hotels.
In a statement, the Shangri-La hotel in Colombo said that the hotel’s Table One cafe was hit just after 9 a.m local time. The hotel is popular with foreign tourists and the country’s business community. 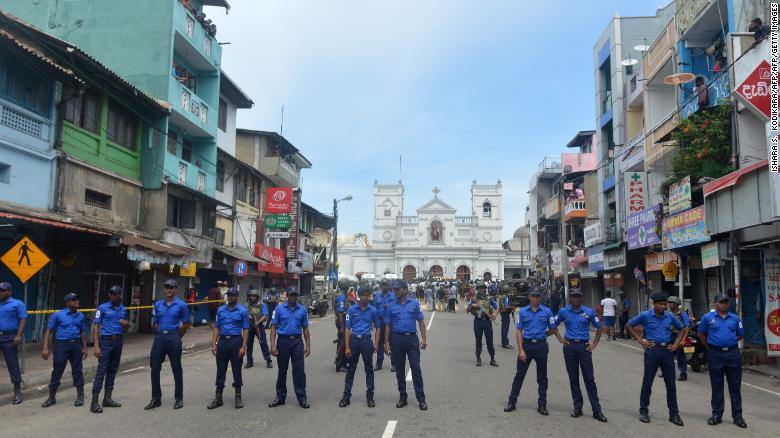 Sri Lankan security personnel keep watch outside a church in Colombo after a blast Sunday.
The country’s authorities convened an emergency meeting involving the heads of the army, air force and navy, according to Sri Lanka’s economic reforms minister, Harsha de Silva.

He said on Twitter that all emergency steps had been taken and that the group would issue a statement on the blasts.
Sri Lanka’s Prime Minister Ranil Wickremesinghe condemned the blasts on Twitter, calling on Sri Lankans to “remain united and strong.”
President Maithripala Sirisena also spoke out following the attacks. “I have given instructions to take very stern action against the persons who are responsible for this
conspiracy,” he said.
Leave has been cancelled for all police in Sri Lanka.

“Horrible scenes, I saw many body parts strewn all over,” de Silva said after visiting the Kochchikade church and Shangri-La Hotel in Colombo. “We took multiple casualties to hospital. Hopefully saved many lives.”
De Silva confirmed that foreigners were among the casualties and said rescue operations were underway, adding that emergency crews were operating in “full force.”
Tweet
Share
Pin1
Share3
4 Shares