NEW YORK—Playing Sloane Stephens can be a puzzling proposition in US Open.

Do you try to hit through her? If you do, you better hit the ball perfectly. Anything less and Stephens is going to run it down and do what she does best: hit an offensive shot from a defensive position.

Do you try to rally with her? Again, you better hit your targets and not let the ball land short. If you do, Stephens, unlike many counter-punchers, can move forward and create her own heavy pace on her ground strokes. In the French Open final against Stephens, Simona Halep eventually decided that her only hope was to rally and simply “not miss any balls.” It worked for her, but she’s also No. 1 in the world. It’s not going to work for everyone. 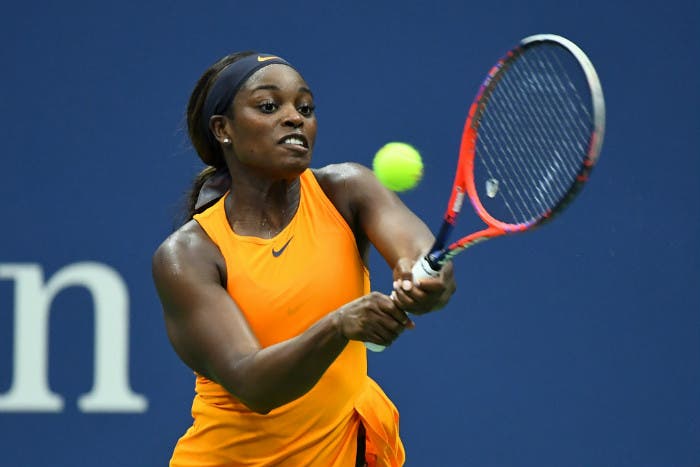 Elise Mertens is not No. 1 in the world; she’s No. 15, to be exact. But she did have success against Stephens recently, beating her in straight sets last month in Cincinnati. A Sloane fan might say that there were extenuating circumstances to that one; namely, a couple of days earlier, she had reached the final in Montreal and lost a marathon to Halep.

More important, as far as Stephens is concerned: Cincinnati is no US Open. Mertens had early success attacking Stephens’ second serve; she hammered two winning returns off it to break for 2-3 in the first set. The result was a match that was the diametric opposite of this afternoon’s fourth-rounder between Serena Williams and Kaia Kanepi: that was a shootout; this was a chess match.

Neither player could sustain momentum for long. And on Sunday, this is where Stephens made herself an unsolvable riddle for Mertens.

Mertens tried to split the difference between attacking Stephens and rallying with her. Most important, Sloane’s speed forced Mertens to go for too much in her quest to end the rallies.

This is the tournament she has been pointing toward, and this is the tournament where she has shown more emotion over the course of the first week than she may have shown in the rest of her career combined. Sloane, meanwhile, was trying to move Mertens back with her own looping shots, and move her wide with crosscourt angles.

Each ended up with significantly more errors than winners. Mertens ended up with just 12 winners against 35 unforced errors, though it could be argued that Stephens’ presence alone on the other side of the net means those errors were forced, rather than unforced. She would toss up a moonball, and then drive her next stroke hard enough to catch Stephens off guard.

How did Stephens counter that play? Simple: she made 83 percent of her first serves, and gave Mertens precious few looks at second balls.

She has allowed herself to show the crowd how much winning at the Open means to her, and the New York fans have responded to that emotion.

“It’s crazy, it’s so special,” Stephens said today. “I think an American playing at the US Open is incredible.”

According to Sloane, who is ranked a career-high No. 3 right now, she’s also motivated by the chance to become No. 1.

“There’s only two more spots to go,” she said. “That’s exciting. It’s something new. I’ve never had that type of, like, challenge before.”

“I’m excited about where my game is, about competing, about being on the court.”

And on her first match point, Sloane ranged forward and knocked a confident forehand inside-out for a thumping, authoritative winner.