At Grand Central Station Live Show, the live concert of Paul McCartney was a dream come true for all the fans of Beatles as well as Paul McCartney fans.

Chances are good that if you’re reading this, you’ve already watched the YouTube livestream of Paul McCartney’s “secret” “private” concert at New York’s Grand Central Station. So there’s probably not much point in recapping the show (it’s replaying here).

Obviously, McCartney doesn’t need to tour — he’s doing it because he wants to, and unlike follow-the-muse artists such as Neil Young or Prince, his motivation seems to be pleasing crowds.

We got plenty of hits on Friday night, but also seldom-played songs — the Beatles’ 1963 hit “From Me to You” — and an unusual arrangement of the more recent “Valentine” with Paul singing it through a megaphone, giving it a 1920s feel.

It found the former Beatle in fine fettle if slightly rough voice, racing through songs from nearly every era of his career, from “Love Me Do” to “Blackbird” (which he performed on a small stage in the middle of the crowd).

And several from his new album “Egypt Station,” which, obviously enough, is the thematic link to staging a concert at “the coolest station we could think of,” as McCartney put it.

The show was special even for those of us who have seen him perform live multiple times — and not just because he was singing a dozen feet away.

Now lets talk about the things that will amaze you. Here are a few things you might not have seen on the livestream: 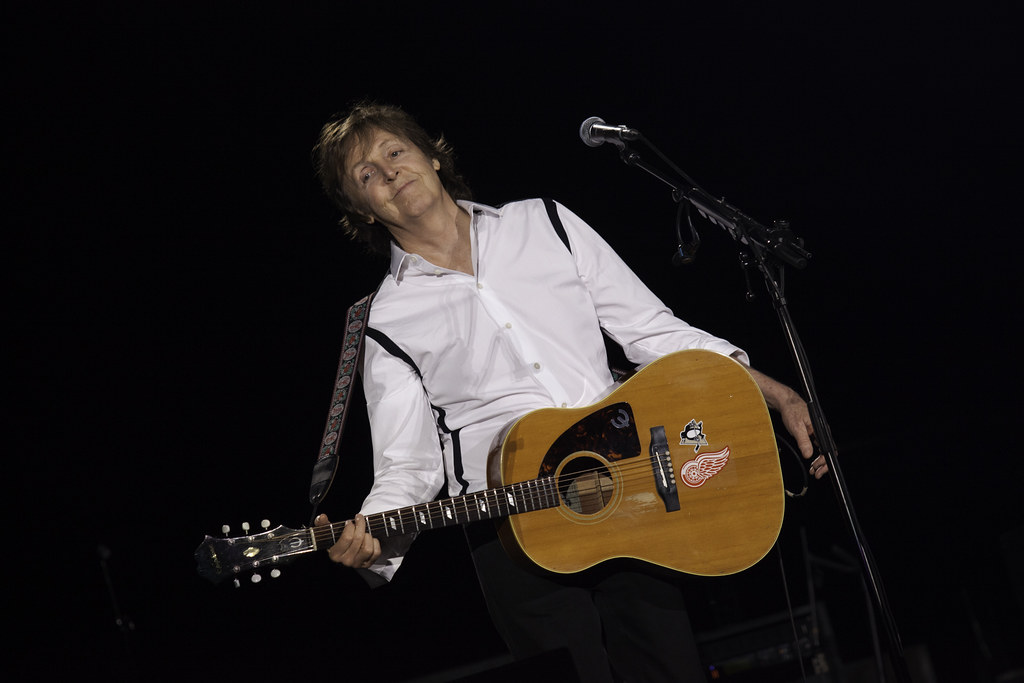 The opening stunt was instructed to the crowd by Paul McCartney himself.

The conceit for the start of the livestream was to have Paul, onstage alone, testing the room’s acoustics, then singing a line from “Hey Jude” and having the unseen crowd sing the next line back to him; it would close in a similar fashion with answering finger snaps.

McCartney instructed the crowd before the show on the opening stunt. As he took the stage and the crowd went wild, he charmingly explained the entire conceit to us — and drew a laugh when everyone kept singing “Hey Jude” and he had to wave his arms and say “No, no — just the one line!”

He closed the show with the finger snaps — and when everyone complied, he smiled “Brilliant!”.

Senior citizens and middle-aged people lose all composure in the presence of a Beatle.

I’ve seen Prince and Guns N’ Roses and U2 and Nirvana in their heyday. I’ve seen Black Flag.

There’s still nothing like the way people shriek, babble, and behave as if they’re being pulled by unseen ropes when a Beatle is near. But who’s complaining?

We’re not likely to see McCartney performing in Grand Central Station again any time soon …. Senior citizens and middle-aged people lose all composure in the presence of a Beatle.

I’ve seen BTS. When McCartney walked into the crowd for “Blackbird,” it took long-dormant football training to hold my ground.

The crowd not only had fans but also celebrities:


At once-in-a-blue-moon shows like this, you see the fanboy/girl come out in all kinds of famous people.

Mingling in the audience were Meryl Streep (who was apparently in the livestream, because the horn section that performed in the crowd during “Ob-La-Di, Ob-La Da” was right in front of her), Jon Bon Jovi, Steve Buscemi, Chris Rock, Kendall Jenner, Sean Lennon, Amy Schumer, Jimmy Fallon, Kate Moss, Bobby Cannavale, Greg Kurstin (Grammy-winning producer who helmed “Egypt Station”), and that’s just who we saw with our own eyes.

Another cool thing about Paul McCartney..:

Paul still wears Beatle boots. They’re suede but otherwise classic Beatle-style Cuban heels, the ones the moptops made synonymous with their name. It’s kind of adorable.

Paul McCartney did had some issues with the lyrics, but who cares…

He messed up the lyrics to “Blackbird” twice, even though they were printed on a sheet of paper right in front of him.

I often wonder how it’s possible for singers to forget the lyrics to songs they’ve written and/or sung hundreds or thousands of times, but it happens to nearly all of them.

Not that anyone but him cared on this night — the sight of McCartney walking through the crowd and climbing onto a small stage six feet in front of you is fairly unforgettable (and not just because there was a woman leaning on my back and singing along loudly in my ear).

But our vantage point also showed that the lyrics were printed on a sheet of paper taped to the stage, right in front of him — perhaps his 76-year-old eyes have not aged as well as the rest of him.