After losing the series,Virat Kohli – ‘We were not good enough’.

ENG VS IND : At Southampton, on Sunday , after India bowling out England at 271 , needed 245 to win the match . India lost the top order quickly, and the match was on the shoulder of Captain Virat Kohli and Ajinkya Rahane.

Despite a gritty 101-run partnership between Virat Kohli and Ajinkya Rahane, India’s resistance crumbled after the captain was dismissed for 58 by Moeen Ali.

Here is how Twitter reacted after India lost their fourth Test match:. Kohli and Rahane, however, gave India hope with their partnership but after Kohli’s dismissal, India lost their last six wickets for 51 runs.

From 36 for 4 in the 1st Innings to Win by so many is some performance … Sam Curran deserves a lot of the credit as do all the bowlers who have been outstanding this week .. & the catching ?#EngvInd

India have had their moments in every test match barring Lord's. But moments don't win series and it is back now to introspection.

In 2014, it was quite apparent that there’s a lot more to Indian batting than Kohli. Unfortunately, that’s not how it feels in 2018. #EngvInd

Again, what could have been.
Sam Curran made the difference with the bat both in the first test as well as here, but Moeen Ali was the difference between the two sides.

Moeen also claimed the wicket of Rahane (51) and ended with figures of four for 71, having bagged five wickets in India’s first innings. England lead the series 3-1 with one match to play. England won the fourth Test to wrap up the series with a match to spare after bowling India out for 184 on Sunday

In the post match presentation , Virat said, “We thought we were in with a chance last night but we didn’t get the start we wanted, they were relentless with the ball and applied pressure throughout. Credit to them, they bowled well and we couldn’t get enough.

“Mindset was one ball at a time, me and Jinks wanted to put on a partnership. Usually you’re in the chase with a partnership but they made early inroads and we knew a couple of wickets would put pressure on us. We enjoyed it out there, but they pulled it back, that’s the beauty of Test cricket”.

England won the fourth Test to wrap up the series with a match to spare after bowling India out for 184 . 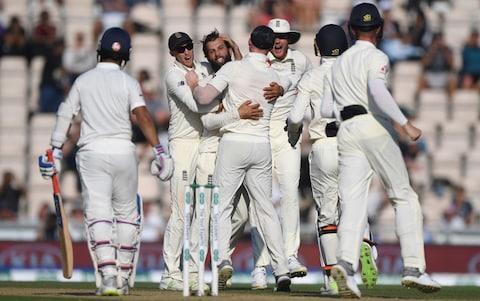