NEW DELHI: India will now be on a stronger footing in case of Doklam-type crisis in future as it will have access to superior intelligence and information about battle situations, thanks to COMCASA.

COMCASA, or Communications Compatibility and Security Agreement, which India and the US have signed today during the ‘2+2 Dialogue’ between the two countries, will get India military critical and encrypted defence technologies from the US.

India and China were locked in a conflict for months over a border dispute at Doklam on the India-China-Bhutan border last year. 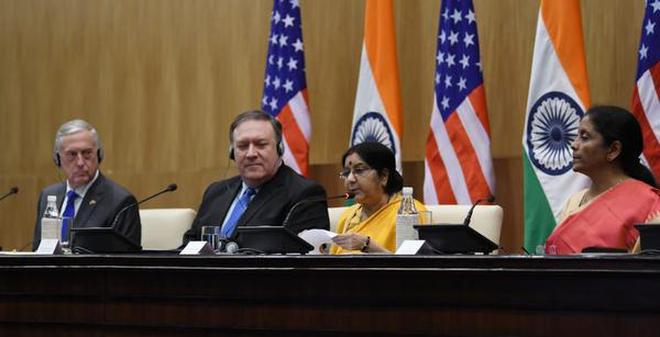 Below are the reasons why COMCASA is so important for India:

1. The US data link is considered the most secure communication platform, which will also allow India access to big data base of American intelligence, including real-time imagery.

2. COMCASA will also help India obtain the armed version of the Sea Guardian drones. The US could not part with the weapon systems on the drone without COMCASA which will now allow installation of data and communication systems.

3. Without this agreement, the US cannot part with highly coded communication equipment with the military platforms they sell to India. India has to depend on commercially available less secure systems on, otherwise, high-end platforms like C-130Js and the P8I maritime surveillance aircraft, among others. COMCASA will change that. Now the US government will be able to give the go-ahead to install the best communication equipment on relevant platforms such as aircraft being sold to India.

5. India has already signed the Logistics Exchange Memorandum of Agreement (LEMOA) with the US. With the singing of the platform, India has gone one more step ahead in strengthening India-US military ties. LEMOA, COMCASA and BECA, or Basic Exchange and Cooperation Agreement for Geo-spatial Cooperation, are the three foundational defense pacts that a country needs to sign to obtain cutting-edge weapons and communications systems from the US. India hopes to move ahead on BECA too in near future.
6. The Comcasa provides the legal framework for the US to part with its sensitive communication equipment and codes to enable transfer of realtime operational information. This equipment is largely used for ground-to-air communication, on installed US-origin military aircraft, to enable best battle situation awareness.
7. The Comcasa will allow both sides to operate on the same communication systems, enabling an “interoperable” environment for militaries.