At the 2018 French Open, Serena Williams stunned fans when she stepped onto the court in a catsuit.

Williams looked stunning in Black with a red waistband, the full-length bodysuit.

Serena,a new mom; she was likened to a superhero in the ensemble. 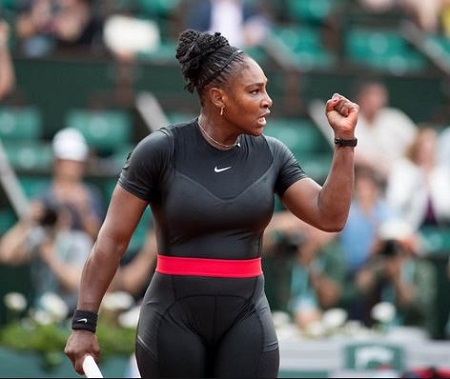 Though, Williams looked stunning and her fans appraised her for her looks, the catsuit won’t be welcome at Roland Garros again.

While fans and the media praised the look, French Tennis Federation president Bernard Giudicelli said in a Tennis Magazine interview published Friday that it won’t be back.

“I think we sometimes went too far,” he said. “The combination of Serena this year, for example, it will no longer be accepted. You have to respect the game and the place.”

The catsuit ban led to considerable backlash in the days since it was announced. Williams herself weighed in and said she was not upset by the decision.

But Giuidicelli’s comments ignore the history of the game: Tennis has long been a sport where athletes’ fashion choices have been the source of conflict.

Male and female players alike have toed the line when it comes to the dress codes imposed on them, and others have boycotted tournaments altogether because of the required attire.

Throughout the history of professional tennis, the trends of the times have influenced player dress.

This makes Serena Williams’s Wakanda-inspired catsuit no more disrespectful of the sport than what tennis stars have worn on the court for more than a century.

The idea that Williams disrespected the sport by wearing the bodysuit outraged fans because the tennis star explained that she wore the ensemble both with her health in mind. And to inspire mothers.

Williams has a history of blood clots and developed one after giving birth to her daughter, Alexis, in September via C-section.

She dedicated her Black Panther-inspired catsuit to “all the moms out there that had a tough pregnancy.”

“I’ve had a lot of problems with my blood clots,” she said at the French Open. “God, I don’t know how many I’ve had in the past 12 months. I’ve been wearing pants in general a lot when I play, so I can keep the blood circulation going.”

While the ban on such ensembles is still unofficial, Giudicelli’s remark led to backlash. When asked about the catsuit ban, Williams, however, downplayed his remarks.

“I think that obviously the Grand Slams have a right to do what they want to do,” she said.

Fans surprised that she doesn’t appear outraged by Giudicelli’s callout of her catsuit are likely overlooking how much she has already overcome in her career.

But she is talented and self-possessed enough to know that whether she’s in a catsuit, a skirt, or a dress on the court, she’ll persevere.

“Everything will be okay,” Williams assured fans after Giudicelli announced the catsuit ban.

And her distinguished career in the face of pervasive attacks on her professionalism, appearance, and upbringing leaves little doubt that she’s right.