ENG VS IND : Indian skipper Virat Kohli in a press conference gave a hint that team India will play the 4th test with unchanged XI.

Team India will be going into the fourth Test with a lot of belief. After the monstrous win over England. India won the third test by 203 runs.

Just a few weeks back, the series looked bound for a whitewash after a disastrous Indian performance in the second Test.

But everything has changed after a stunning victory for Team India in the third game, where they convincingly outplayed England in all departments.

This win has given them a belief and they will fight back in the 5- match series. 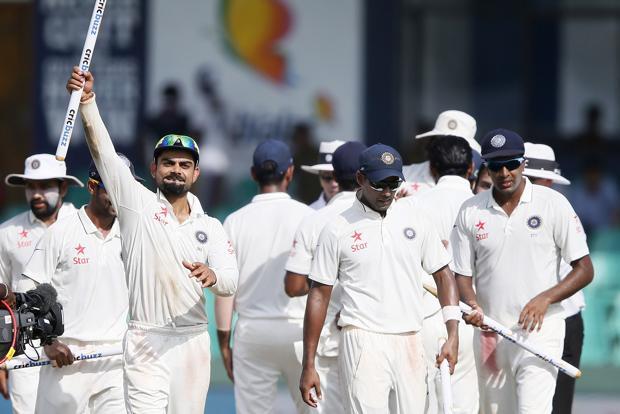 During the test match, R Ashwin had an hip injury. In the press conference,  Virat Kohli said R Ashwin has recovered from his hip injury and is fit to play the fourth Test against England.

Also he hinted that he would field an unchanged side tomorrow after changing the playing XI in each of the last 38 Tests.

In the press conference, Kohli said,

“Everyone is fit to start tomorrow. Ashwin has recovered nicely. He had a good practice session yesterday. He is good to go,” Kohli told reporters.

“It has not always been the case of (making random) changes. There have been injuries as well, which have not been taking in to consideration. It has been a mix of both. Seeing the way things are right now we don’t feel we need to change anything.”

He then continued saying  “We probably didn’t have the experience to capitalize on the lead (1-0 after win at Lord’s) is how I see things four years down the line,” he said. He was reflecting on India’s tour of England in 2014.

“Right now we understand that we are in a very exciting position to have gained momentum at the right time in the series. To have played like that when 2-nil down, when everyone thought that it is going to be a clean sweep or we are going to be rolled over.”

Kohli asked his team to be relentless and ruthless and capitalize on the winning momentum.

“As cricketers we understand when the Test match goes away from you and we spoke about recognizing that. And making sure that we are relentless and ruthless in terms of capitalizing on those important moments, which we did in Nottingham,” he said.

“But also to understand that we will have to do that two more times for us to achieve the goal that we want to (of winning the series). And not be satisfied at all with one victory only because if Nottingham was hard work, this is going to be even harder.

“England would want to come back strongly. We understand that and we will have to be even better with what we did in Nottingham to be able to get results our way,” he added.

However, Kohli ruled out the possibility of an all-pace attack.

“If there is a pitch is like Johannesburg then you have no doubt whatsoever in playing an all out pace attack. But I don’t think this pitch is anywhere close to Johannesburg. So I doubt an all pace attack is the right option,” he said.

Talking about Indian pacers, Kohli said, “You feel very confident when you see bowlers doing very well. We’ve been talking about it for a while now that even if you score 800 or 1000 runs in Test matches, if you don’t take wickets, victory won’t come.

“We don’t think we are at a disadvantage when it comes to pace bowling. We think we are equal to any team in the world and if we play well, we can win anywhere.”

When asked if the batsmen, including him, will have to change their techniques to adapt to this green top wicket, Kohli said, “I don’t think there’s any need to change the way I’ve played so far in this series, or other batsmen the way they played in the last game.

“If the wicket is behaving totally different, you have to be flexible adjusting there and not having pre-set notions about going out wanting to play a certain way.

“Apart from the pitch, conditions are going to be a massive factor as well because it’s cold for the last couple of days and it’s going to remain like that from what I understand. We will have to assess the situation every hour I guess because it can change very rapidly,” he signed off.